Our blog is intended to inspire and educate others about documentary photography. In our Behind the Frame series, we’ve asked staff and students to go back to their favorite images over the years and tell us, “Why does this stand out to you as an exceptional documentary moment?” We hope you enjoy what they have to say! 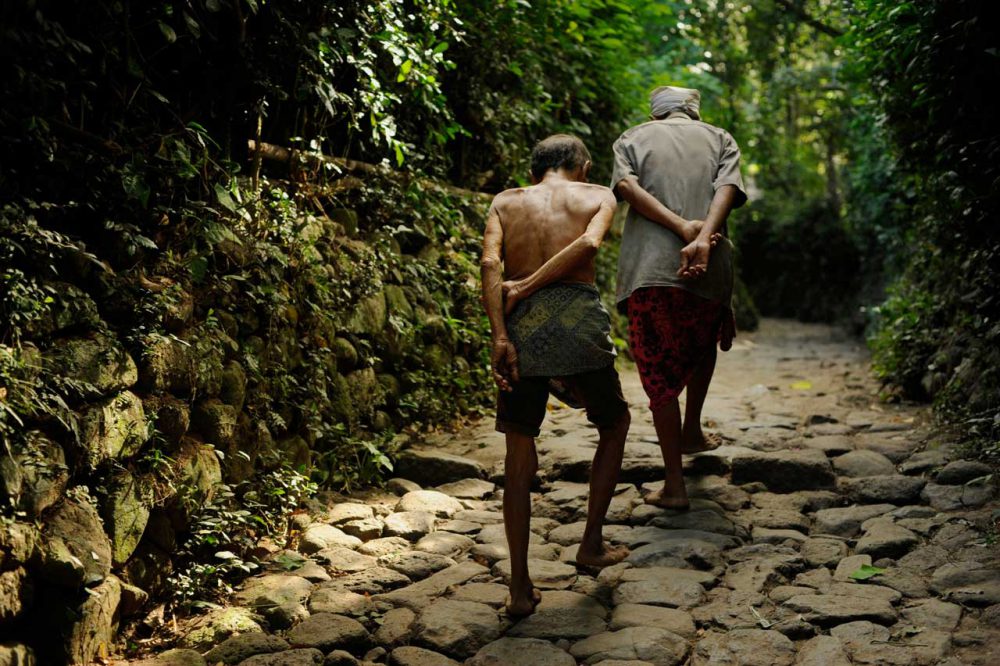 Near the village of Tenganan in Bali, Indonesia one of Momenta’s founders, Seth Butler happened upon a small but unparalleled moment. While scouting the area for students, Seth happened upon a temple anniversary celebration in a hamlet not far from the village, as of that moment the village had yet to be visited by anyone in the group.

“I was walking back down from taking a cursory look at the pathway to the temple when I passed two elder men walking up to that same ceremony. We exchanged smiles and bowed as they walked past me up the hill. I kept walking on along for a short spell, then had the realization that I might never see their like in just that same light again. I turned around 180 degrees and walked slowly back to meet them on the path. I bowed again in their presence and gestured with an open hand in the direction they were heading to the temple. They bowed in return, returning my same gesture — nothing exchanged but our smiles — permission was granted to join them.”

As he fell in behind the two men, he was reminded of a conversation with Momenta’s local guide, Nora, on the Balinese traditions in his hometown. As he watched these two elders slowly make their way, he recalled the concept of Banjar, the social structure that relates to legal, fiscal, and ritual matters in Balinese culture.

“Having already walked the path they were taking, I knew the surroundings well enough that I could focus my sight on the elders as they walked up the hill in step, knowing the background and the lighting situation well enough to focus on photographing their gestures. It struck me, while I was walking with them that they might have made this very same journey many times together.

“Walking with one eye through the camera lens, I was taken by how both their arms were folded on opposite sides behind their backs. How they looked dissonant to each other; one wore green and the other red; one was tall, and one was short, but they shared the same harmony of step.

“They were walking separately yet connected in their slow gait to the ceremony. I noticed how they overlapped slightly in the frame and worked to separate them from the background and isolate them in the light as best I could while walking with them up the hill. I stopped following them after photographing a short while, quieted my camera and watched them walk on along into the bright opening at the end of the forest path.

“On a strictly personal level — one that I’d never expect a passive viewer to recognize — the image speaks to the idea of fellowship in small town community, to a general sense of shared humanity. How we might be all drastically different from each other, but we’re headed in the same universal direction.”

“From an aesthetic and technical perspective, he’s distinguished himself as an unbelievably mindful photographer. He’s one of the most careful photographers I know. Every frame he selects is done with careful consideration of authenticating and validating his subjects using his uniquely objective model of observing his subject matter.

“Seth never scurries around, nor imposes himself on his subjects. On top of this, he always presents himself with appropriately restrained passion and professionalism, which settles his surroundings. This allows him to find very authentic and quiet representations of human interaction. Further, how he paces himself allows him to find the unique blend of light he tends to work within.

“In this case, the image is neither overly flat nor excessively rich. It’s nicely blended mid-tone texture and detail, matched with its subdued palette, gives it an appropriate emotional effect. I particularly enjoy this image because it has always reminded me of the two of us, commiserating in some future discussion during our later years. I really enjoy this photo, which is saying something because he hardly selects any I don’t love.”

Join us during Bali 2018: Island of the Gods, The 10 Year Anniversary Workshop to experience moments like this yourself!

John Christopher Anderson, founder of Momenta Group, has been an active player in the photographic industry for nearly fifteen years. His most recent professional experience, prior to launching Momenta Group, was as a Photo and Illustrations Editor for National Geographic Society. During his time at NGS, he edited 16 books and worked on numerous other projects.

Chris was honored to work in conjunction with many notable individuals and organizations such as James Cameron, Walden Media, Lucas Film, NOAA, NASA, Magnum Photos, Silvia Earl and many National Geographic photographers past and current.

Over a decade ago, Chris began his career as a news photographer working at distinguished New England daily newspapers and as a freelance news photographer around the world. Upon receiving a Master‘s Degree in photojournalism from Syracuse’s Newhouse School of Communications, he was chosen by Steve McCurry to help develop his photographic studios in New York during a period of growth.

After this project, Chris took a position as a Photo Editor at AOL News at their main offices in Virginia. He would go on to work with AOL frequently over the years in both editorial and product development capacities. He was one of many lucky individuals to help shape the photographic vision of the organization in it’s strongest years.

In 2008, Chris and Seth Butler founded Momenta Workshops after years of organizing and teaching photojournalism workshops together around the world for private clients. The company has grown to include creative, educational and consulting divisions which Chris oversees. Chris is the driving force behind the goals and foundations of Momenta. He believes deeply in the training of photographers on all levels to find their vision and personal narrative story to tell the world.