Momenta is getting excited for our 2017 1-Day Biz Skills: DC workshop!

We are delighted to announce our panel for the 1-Day Biz Skills: DC workshop on November 13, 2017 at the Leica Store in Washington, D.C. including Nathalie Applewhite of the Pulitzer Center on Crisis Reporting, John Harrington of the book series Best Business Practices for Photographers, and BP Miller of Chorus Photography. Jamie Rose, our co-founder of Momenta, will lead our core lectures: How to Fund Your Dream Projects and Turning Nonprofits into Paying Clients. 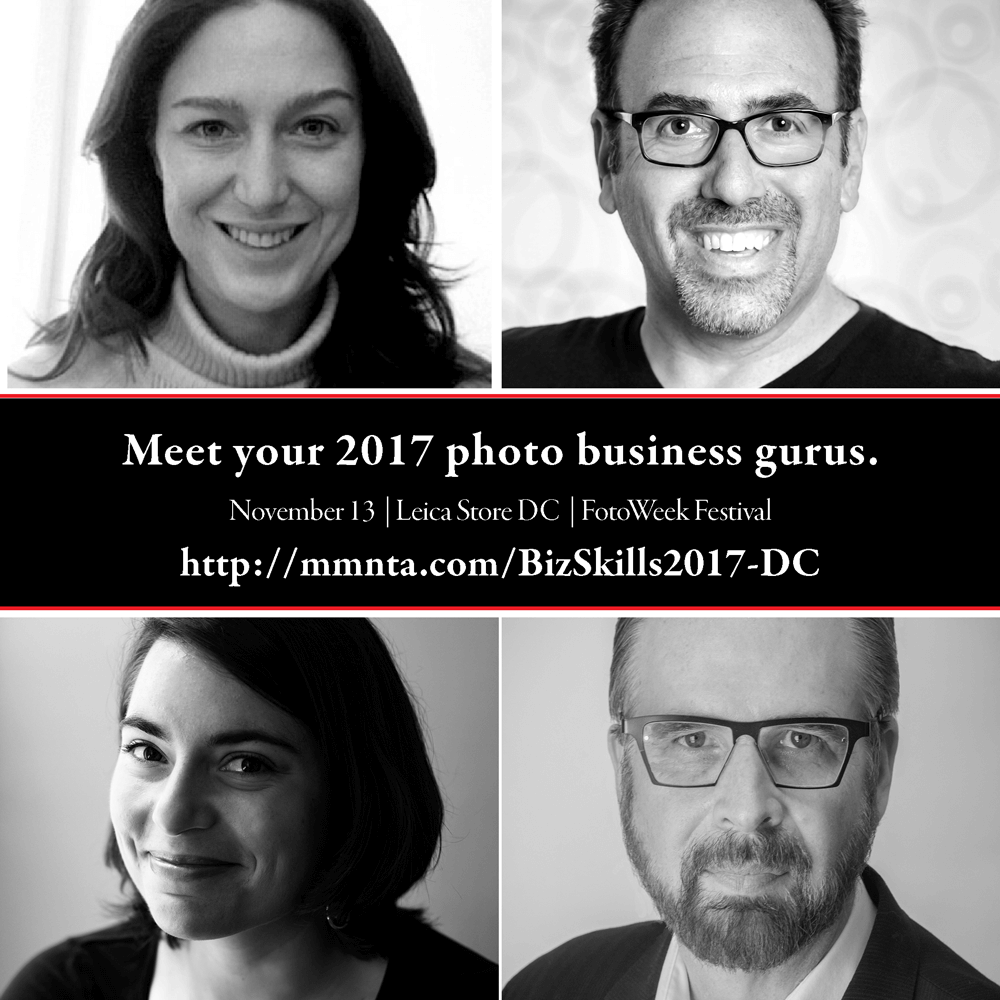 Nathalie Applewhite is the managing director of the Pulitzer Center on Crisis Reporting, a nonprofit journalism organization dedicated to promoting in-depth engagement with global affairs through its support of quality international journalism across all media platforms and an innovative program of outreach and education. She joined the Pulitzer Center in 2006, shortly after its founding, and has played a key role in the development of the Center’s model and approach towards journalism initiatives, multimedia development and educational outreach. And she was the managing producer on a number of the Center’s interactive projects, including the Emmy award-winning LiveHopeLove.

Before joining the Center, Nathalie worked nationally and internationally on documentaries, educational, political and commercial productions as a producer, director, and editor. She also worked as a consultant for the Executive Office of the Secretary General at the United Nations and as a project manager and media specialist for the University of Pennsylvania. Nathalie’s film Picture Me an Enemy (2002), about two young women from the former Yugoslavia, was screened nationally and internationally in film festivals and universities and won the Best Documentary Award in the Philadelphia Film Festival’s Festival of Independents. Nathalie holds a master’s degree from the School of International and Public Affairs (SIPA) at Columbia University, where she concentrated in International Security Policy with a regional concentration in the Middle East. While pursuing her degree, she served as a delegate on the Center for International Conflict Resolution’s US-Syria Citizen’s Exchange program. Nathalie received a BA in Visual Anthropology from Temple University, and completed international programs in France, Latin America, and Japan. You can learn more about the Pulitzer Center at pulitzercenter.org.

John Harrington is a Washington DC-based photographer and nationally recognized business skills guru. He has photographed the world of politics, international travel, and news for decades. His work has appeared in Time, Newsweek, and Rolling Stone and his commercial clients have included Coca-Cola, SiriusXM Satellite Radio, Lockheed Martin, and the National Geographic Society. Harrington has produced three commissioned books for the Smithsonian and the second edition of his book Best Business Practices for Photographers, remains a best-seller. Whether pets or Presidents, leading ladies or lead singers, John can help you drive clients to your company and keep your businesses thriving. You can see more of John’s portfolio at johnharrington.com.

BP Miller is the entrepreneur and award-winning photographer behind Chorus Photography, based in Philadelphia, Pennsylvania. His studio and his work have been published in national publications such The New York Times, Philadelphia Inquirer, Philadelphia Style Magazine, and many more. Chorus Photography focuses their lenses on a range of client stories from local, family run businesses to international celebrities, politicians, and dignitaries and so much more. BP started the studio 11 years ago and now has it to more than 7 contractors working with him. Last year, Chorus expanded its team and national reach to include a new venture in San Francisco with Pulitzer Prize winning photojournalist Scott Strazzante. Chorus specializes in creating innovative, storytelling packages for their clients and believes the photography business should be equal parts fun and hard work or you’re doing it wrong. A passionate advocate for photographer’s rights, BP is the elected Regional Chair (Mid-Atlantic) for the National Press Photographers Association (NPPA) and has volunteered his limited free time to speak across the country educating both photographers and business people alike about non-profit photography, business skills, and photojournalists’ rights. You can normally bribe an hour of his time with a good bottle of red wine and the understanding he will likely bring out photos of his amazingly expressive, well documented pup. You can see more of Chorus Photography’s work at chorusphotography.com.

Jamie Rose has worked as an international photojournalist on five continents, won awards and grants for her documentary photography and has been a contract photographer with some of the world’s largest nonprofit organizations. In 2011, she was awarded the United Nations’ Photographers Leadership Award for her contributions to the field of photojournalism. Her work has been published in National Geographic Books, The New York Times Magazine, The Washington Post Magazine, O Magazine, Rolling Stone, Better Homes and Gardens, Newsweek, TIME Magazine and others. Her nonprofit clients include The Global Fund, Doctors Without Borders, The Calvert Foundation and Physicians for Human Rights among many other local and domestic organizations.  Jamie is considered an expert in nonprofit photography business development. She has been interviewed by Photo District News (PDN), News Photographer Magazine, The Candid Frame, Around the Lens, and numerous online publications about the importance of nonprofit documentary photography. She was recently a featured expert in the book, The Imagination Gap by Brian Reich. She is the co-Founder of Momenta Group and works out of our Oregon headquarters with her husband and co-founder, John Anderson.

We believe the more photographers who learn great business practices in a region = the stronger that marketplace becomes for creative professionals. This workshop usually fills up by mid-October so we recommend early registration to secure your place.

You can learn to use your photography as a force of change by signing up for this workshop today.

Subscribe to our RSS Feed
Five Questions with Marc Alter

Why You Need Medivac & Travel Insurance
Scroll to top